This is the third post in a series of articles covering my week attending the TDi summer course in Reading. Read the Day One and the Day Two.

As explained previously these are unconnected bits and pieces.

Vaibhav Singh is the designer behind Skolar Devanagari.

We were presented with a map of India featuring about 12 Indian scripts, with a notion that there will be more as more communities that need different scripts are identified.

For a better sense of scale Devanagari is spoken by 311M people. Gurmukhi is used by 102M people which is “only” 1.44% of the World population and about 20 times the size of an average east european country like Croatia.

When starting with a broad family, it’s wise to start with glyphs which contain the smallest counters like double-storey A or E or S, because you’ll have the same tiny counters in Indian scripts. Additionally, it’s important to know which loops you can close in heavy weights (Extrabolds / Ultrabolds) in Indian scripts. Unger jumps in here with a legitimate question of whether bolds are necessary in Non-Latin scripts and whether should we impose Latin practices to other scripts. Singh explains that a cultural role of typography is to influence and provide new possibilities, with keeping one eye on cultural legacy. The conclusion is still not clear, but if you want variety — you need to observe and consider these details from the beginning. Ultrabold devanagari still has to be legible (shows an example of Skolar Devanagari).

Modulation in Indian scripts is done in a vertical direction, not in horizontal like in Latin. The bold in Latin widens the glyph, while in Indian it makes it higher. I find this as an extremely important issue for people setting type on the web, because run-in and inline text set in bold in the middle of a regular weight paragraph (as we often do with Latin texts) would break the texture in a vertical direction. It calls for generous interlinear spacing, which is according to Dr. Ross a common practice anyway. Another example of mixed bolds and regulars is Ebela newspaper. More info about some of the problems solved with Skolar Devanagari

Stencilled texts: a history of self-made messages with Eric Kindel

Eric Kindel went through the history of stencils dating back to 1500s. Stencils basically enabled pseudo-printing and in multiple colours for people who didn’t have the expertise to produce good looking and legible designs (not only books, but chanting notes) or to simply speed up the process of reproducing the design.

Stencil style teaches us about the essential parts of the shapes in letterforms, how to preserve the vertical stress and that it can be used as a device to introduce some personality to a typeface.

A little bit of history. During renaissance everything Greek is rediscovered, so they are printing Aristotle & co. Because they wanted to imitate Greek handwriting, books are printed in 6 or 8 cases — many letters were set as ligatures to preserve the handwriting forms. Baskerville (known for transitional typesetting) separated ligatures and started setting Greek glyph by glyph. In 1876 Cambridge commissions a new Greek typeface to differentiate from their education house competitors — Oxford.

Now I know that you cannot understand typeface design if you don’t try to make your own.

I’ve decided to start with Eurostile and recreate the typeface adding what’s technically called “designer’s personality”, admitting at this point that this means distorting shapes a little and shortening terminals a little as you can see on the picture below. 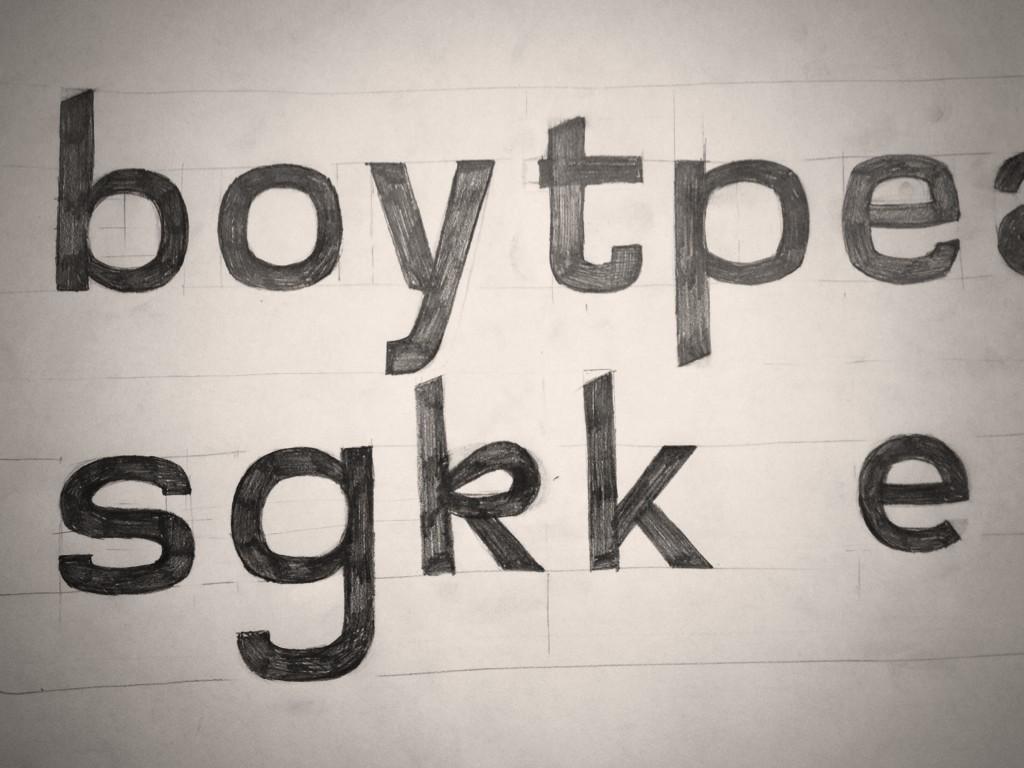 That was fun! The next thing was to take this sketch with approx. 5 cm height letters and photocopy it a couple of times at 50% zoom (copy of a copy) till letters are about 4 times smaller and details are lost. This is where the magic happens. You alienate from your design (it was barely recognisable in my case) and you are therefore able to see all the imperfections.